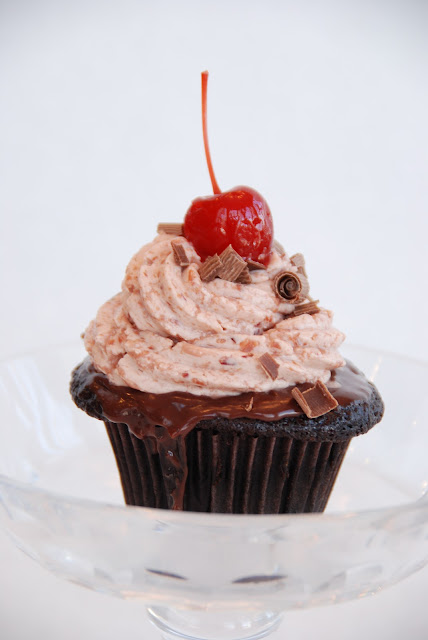 Necessity is the mother of invention.
--Plato
If you've been following my blog this week, you know that we've been snowed in for a record five days!    A measly six inches of snow has frozen a southern town - a town that does not own a snowplow, a sand truck or a shovel.  For a week, we've been without school, without mail and without pizza delivery!  As a midwestern girl living in the south, I used to laugh when the mere mention of snow would send people into a frenzy, emptying the grocery store shelves of milk, bread and water, but no more!  Shamefully, I looked in the garage this week and realized we owned neither a snow shovel nor an ice scraper!  I'm turning into a southern belle!
Next time I will head their warning.... Next time I will buy my cupcake ingredients in advance!
As for today, I will listen to Plato and use my resourcefulness to bake my version of.....
Black Forest Cupcakes! 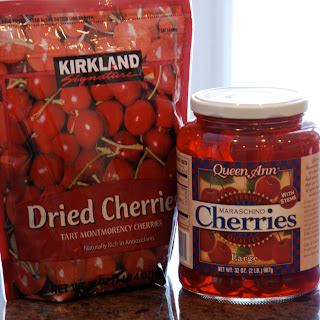 When I realized that driving to the grocery store was probably not a safe idea, I rummaged through the pantry to see which ingredients I had on hand.  As I compared them to the recipe, I counted at least seven items missing.  Not a good start to a cupcake recipe.  What could I make that would combine the elements crucial to a Black Forest Cupcake - Chocolate, Cherries and Cream?
I did find two types of cherries - dried sour cherries and sweet maraschino cherries. 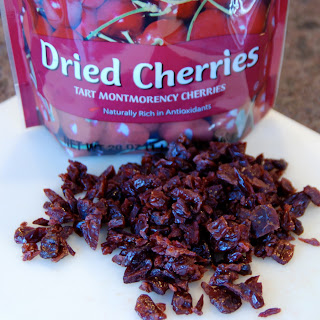 Although the maraschino cherries were much more beautiful, I opted for the dried sour cherries, imagining their taste would best compliment the element of chocolate. 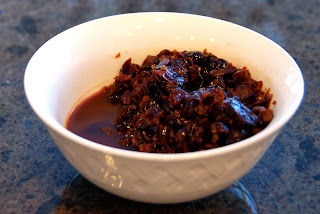 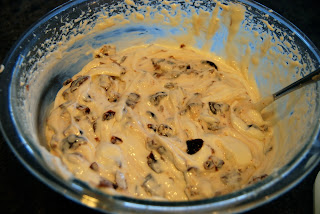 I didn't have sour cream or dark brown sugar, so I used Martha's delicious one-bowl chocolate recipe instead, again, using the old vinegar-in-the-milk trick in place of buttermilk. 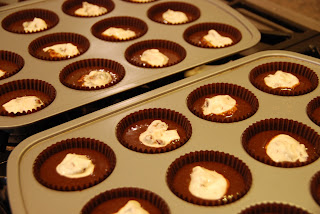 I put a dollop of cherry cheesecake filling in the center of each chocolate cupcake and baked as directed. 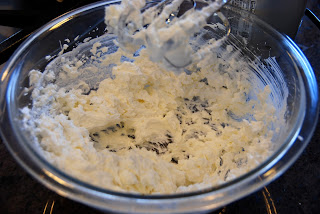 Looking for a little more cherry flavor, I decided to convert Martha's Strawberry Meringue Buttercream into Sour Cherry Swiss Meringue.  I did this by reconstituting more cherries, processing them in the blender, and adding them to the buttercream at the end. 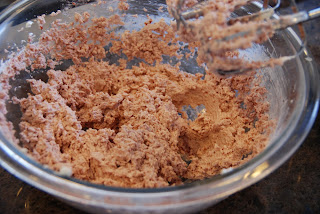 The resulting taste was delicious and complex, although I would have preferred a smoother texture. 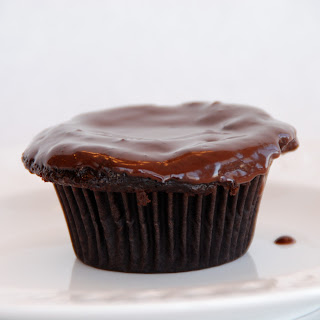 I added another layer of chocolate by including the chocolate ganache that was in the original recipe. 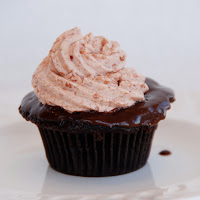 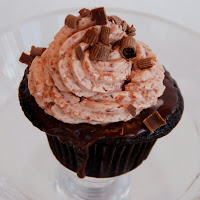 I topped that with some chocolate shavings, 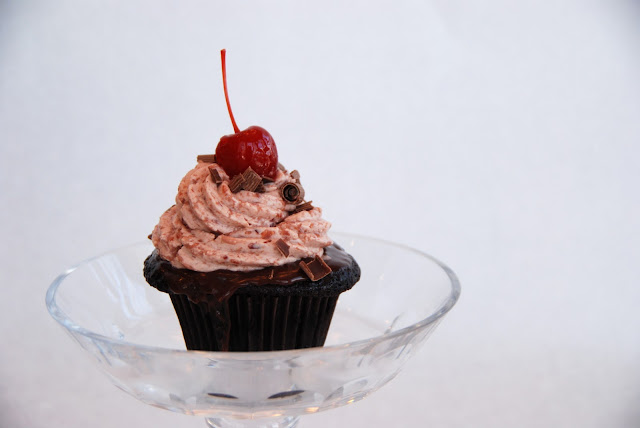 and decided to finish it with a maraschino cherry. 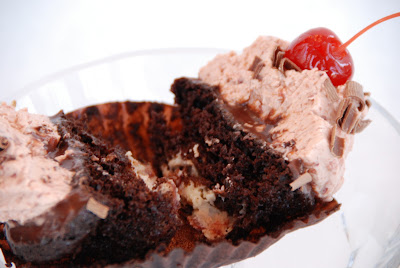 Here, you can see all the layers.
My husband and son thought they were delicious!  Not a bad ending to a snowed-in week...
Or maybe it's just cabin fever!
Thanks to Janine at Janine's Crazy World for today's great selection!
Simple Girl's Black Forest Cupcakes
Bake MSC

holly said…
Snowed in is the worse!! We went from 20 degrees last week with snow to 50 degrees with lots and lots or rain. Crazy weather. Anyways loved how you substituted ingredients, you had a lot more on hand than I would have. The cupcakes truly look mouth watering. Great Job!!
January 14, 2011 at 11:36 PM

Janine said…
Wow...what dedication and resourcefulness! And your cupcakes look wonderful. Thanks for baking.
January 15, 2011 at 9:31 PM

Rebecca said…
You are so resourceful! I am impressed. And your version seems delicious so I will have to try!
January 16, 2011 at 2:06 PM