Showing posts from September, 2010
Show all

Ella Dancing Barefoot in the Spring 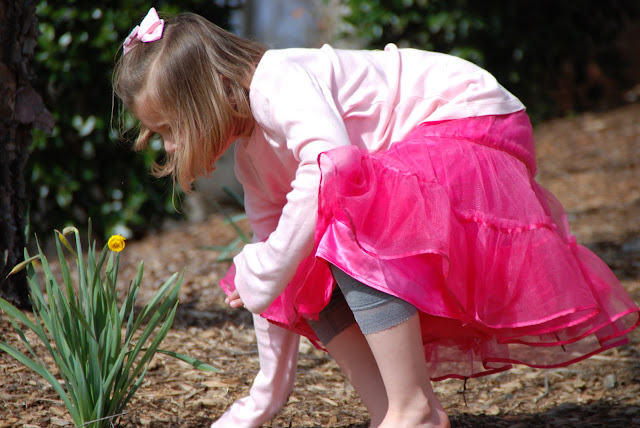 When the hot, humid days of summer linger and the crisp, cool days of autumn hold nothing but empty promises, I remember the first days of spring.  I remember days when I longed for the warmth  of the summer sun. I remember when daffodils  forced their bright heads through the cold and sleepy earth and sweet-smelling air rushed in like breaths of freedom I remember when tender feet once hibernating in winter shoes  felt the first soft blades of grass I remember Ella dancing Barefoot in the Spring.
2 comments
Read more 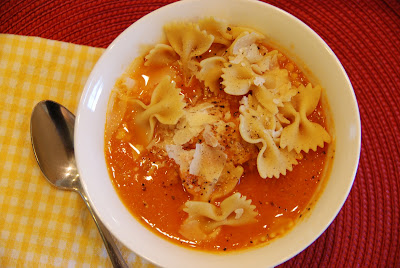 This recipe comes from a cookbook called Deceptively Delicious by Jessica Seinfeld.  Yes, that would be comedian Jerry Seinfeld's wife!  The premise of the book is to puree a bunch of vegetables and then incorporate them into recipes, thus, increasing the meal's nutritional value.  I have tried several of the recipes in this book with good success (and yes, I have no scruples when it comes to veggie deception!).  This cooking method is made easier by spending an hour or two up front, pureeing a bunch of veggies and freezing them in 1/2 cup servings. This particular recipe can be made by simply cooking the vegetables in the soup and then pureeing the soup in the blender.  In this case, rather than simply hiding the vegetable flavor in an ordinary recipe, I think the addition of sweet potato and carrot puree to the tomato-based soup actually enhances the flavor and helps balance the otherwise acidic tomatoes. I paid full price for my cookbook, but spotted it recently at Kohl&
5 comments
Read more 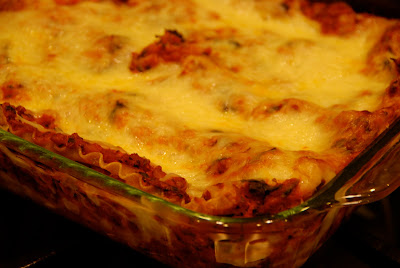 When it comes to cooking, I've never been very good at following directions, which is why my lasagne never tastes the same twice!  Always trying to make dinners just a little bit healthier, I've tweaked the basic recipe to include lean ground turkey, whole wheat noodles, chopped spinach and low-fat cheese!  The only one that complained about the spinach was Ella, but then again, she also fussed about the meat, the onions and the red sauce....... Turkey Spinach Lasagna 1 Package whole wheat lasagna noodles 4 cups shredded mozzarella cheese Sauce : 1 cup frozen or fresh diced onion 3 garlic cloves, minced 2 Tablespoons EVOO 1/2 pound ground turkey 1/2 pound turkey sausage 2 - 28 ounce jars of your favorite pasta sauce (Today I used Kroger 6-cheese) 1 12-ounce bag of frozen, chopped spinach Saute onions and garlic in olive oil until translucent, but not brown.  Add meat and cook until brown.  Add pasta sauce and chopped spinach and cook until spinach is thawed a
Post a Comment
Read more 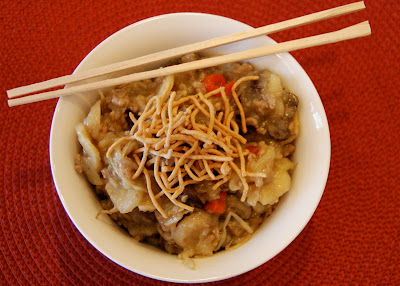 Growing up, this meal was a weekly dinner staple.  My mom was always health conscience and this dish packed in the veggies!  I don't believe I ever saw a printed recipe for this growing up, but when my college roomie, Kim, called me out of the blue at 5PM from Missouri one day because she "had a pound of ground turkey and needed the recipe!", I decided it must be a keeper.  Following is my version of Turkey Chow Mein. Turkey Chow Mein 1 - 1 1/2 pounds ground turkey 1 cup diced celery 1 cup diced onion 1/2 pound baby portabella mushrooms 2 cans bean sprouts, drained and rinsed 2 cans sliced water chestnuts, drained 1 small jar diced pimento 1 1/2 cups chicken stock 2 teaspoons chicken granules 2 teaspoons brown sugar 4 tablespoons corn starch Saute onions and celery in a small amount of oil until softened.  Add the ground turkey and cook until browned.  Add the mushrooms and cook 2-3 minutes.  Add the bean sprouts, water chestnuts, pimento, chicken broth,
Post a Comment
Read more 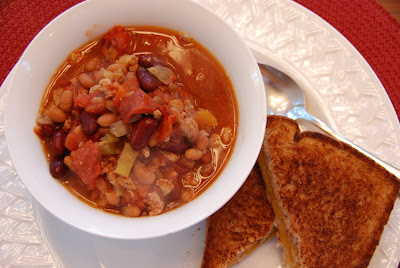 So if you're from some southern town that's famous is for its hot and spicy chili cook-offs, this recipe might not be for you.  But if you're looking for a way to get your kids to eat some vegetables and legumes, it might be worth a try.  My secret ingredient?  Baked beans.  They're so small, they just end up blending in with the turkey!  The little bit of brown sugar that's in the can doesn't hurt either.  Notice the recipe doesn't even include chili powder.  The addition of cumin gives it all the smoky flavor it needs without turning up the heat. Family Friendly Turkey Chili 1 cup diced onions 1 cup diced celery 1 tsp garlic salt 1 pound ground turkey 2 28-ounce cans Muir Glen Fire Roasted Tomatoes 1 can kidney beans 1 large can original recipe Bush's baked beans 2 tablespoons cumin Soften the onions and celery in a non-stick skillet with a little bit of oil.  Add the turkey and garlic salt and cook until browned.  Transfer the turkey mi
1 comment
Read more 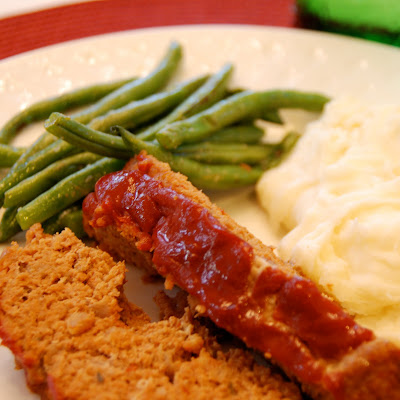 I arrived home from Costco, recently, with a 7 pound package of ground turkey - only to open the freezer and realize that I had purchased the same thing last week! Rather than store 14 pounds of ground turkey in my freezer ad infinitum, I decided to cook through my favorite ground turkey recipes and share them with you! This meatloaf is deliciously moist and flavorful.  I've never had a bad batch.  With five POUNDS of turkey, it makes an enormous loaf, so feel free to cut the recipe in half.  With a family of six, however, I'm always looking for large recipes, so this one is a keeper!  I usually put half in the freezer for another meal and still have enough leftovers for sandwiches! Ina's Turkey Meatloaf The Barefoot Contessa Cookbook, by Ina Garten 3 CUPS chopped yellow onions (2 large onions) 2 TABLESPOONS olive oil 2 TEASPOONS kosher salt 1 TEASPOON freshly ground black pepper 1 TEASPOON fresh thyme leaves (1/2 teaspoon dried) 1/3 CUP Worcestershire sauce
2 comments
Read more 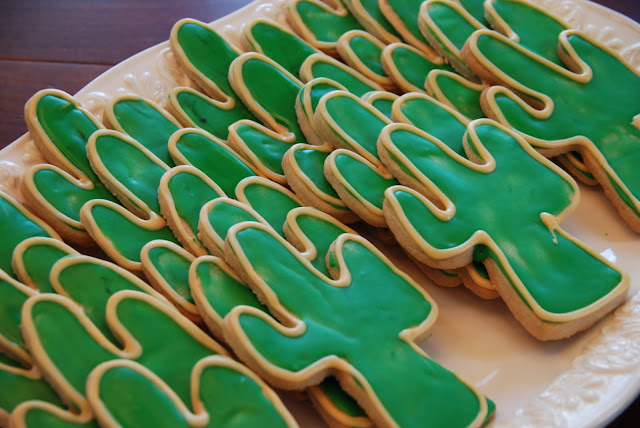 Only one week after the Yellow Daisy Craft Fair, I had the opportunity to use one of my new cookie cutters (Hooray!) when we were invited to a Fiesta-Themed evening at PK and Bonnie's house!  My new one-armed bandit cactus cutter worked perfectly and a grove of green cacti made a fun addition to the dessert buffet. As I looked at the cutter, I thought with some white icing and black eyes, I might be able to re-purpose the one-armed bandit into a two armed ghost!  Halloween is just around the corner!  For my cut out cookie shortcuts and icing recipe, click here ! Guacamole Salad Photo Courtesy of Foodnetwork.com In addition to the cookies, I brought Ina Garten's Guacamole Salad.  If there is one Food Network star in whom I have complete culinary confidence, it's the Barefoot Contessa.  I took a risk by bringing a recipe which I had not previously tried, but, as usual, she did not disappoint!  The picture in the cookbook looked so colorful, I knew it would be a su
Post a Comment
Read more 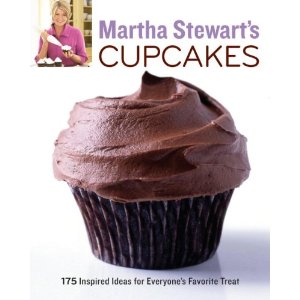 One of the very fun things about having a blog, I have discovered, is being able to join an online baking club!  Apparently there are thousands of bloggers out there, honing their culinary skills, and blogging about nothing other than food!  My college BFF and source of inspiration, Rebecca, opened my horizon to these endeavors when she started her culinary blog, Beurrista .  Who knew that taking pictures of otherwise ordinary kitchen fare could be so much fun! As I pondered the idea of joining a baking club, I considered several, but in the end, decided to start with Martha Stewart's Cupcake Club .  First of all, I am a huge Martha Stewart fan.  I became a charter subscriber to her magazine when I was (9 maybe? :-) and have received every issue since.  I even stood in line for two hours at the Georgia Aquarium to have Martha personally sign her COOKIES book!  (But that's a story for another time.)  Secondly, who doesn't love cupcakes?  I knew I would have plenty of occ
12 comments
Read more 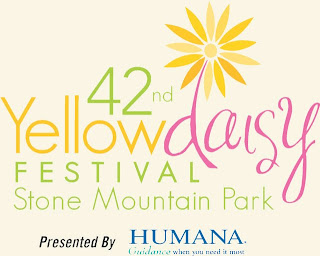 September 9 - 12, 2010 When my friend, Carol, invited me to Stone Mountain's Yellow Daisy Festival , I wasn't sure what to expect.  What kind of people go to one of America's largest craft fairs?  What kinds of things do they sell?  I envisioned grey-haired ladies wearing appliqued sweatshirts selling quilts and counted cross-stitch pillows (there were a few of those) and long-haired hippies playing the harp and mandolin (OK, there a few of those, too), but for the most part, it was a fun display of relevant artisan objects. The festival was named for the fall-blooming Confederate Yellow Daisy which was discovered in 1846 on the outcrops of granite at Stone Mountain.  But nobody is coming here to see the flowers.  With over 400 vendors representing most states in the union and a couple other countries, people swarm here for one reason and one reason only - to shop.  The veterans shoppers arrive promptly at 10AM with lace-up athletic shoes and wheeled carts in hand.  T
2 comments
Read more 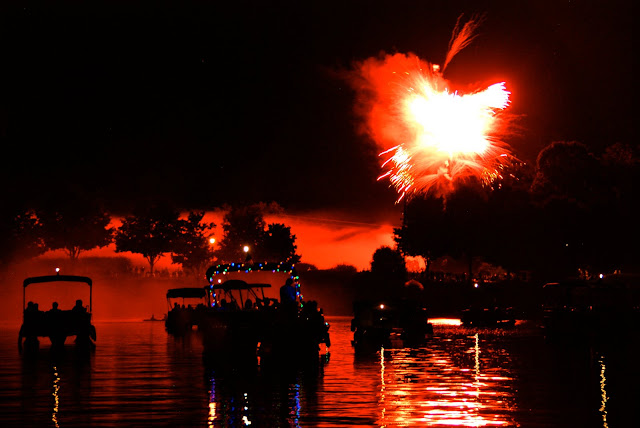 Labor Day Fireworks The calendar may disagree, but Labor Day Weekend always seems to mark the end of summer.  Although weeks before, the kids started school and weeks to follow will still see the temperatures soar, the long weekend brings closure to those carefree days of possibilities - days that are marked with play and exploration and dreams.  With fall encroaching, we nestle into our practice and studies and routines - routines that, without their playful contrast, would hold far less comfort and warmth and meaning. Each year our neighborhood forgoes the traditional 4th of July Fireworks and instead, commemorates the summer's farewell.  We viewed them by boat with for the double effect of fire and water.
Post a Comment
Read more 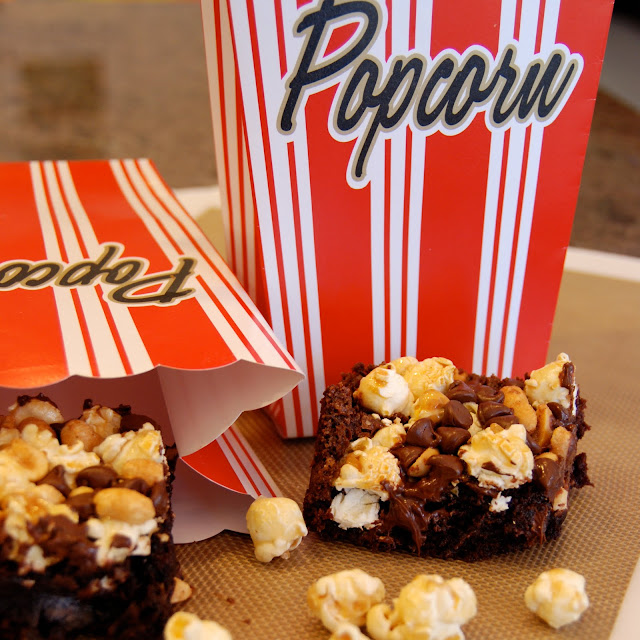 Today, September 2, 2010, is my husband's official favorite day of the year - the opening of the College Football season!  To celebrate, we invited to dinner the only other known Minnesota-Golden-Gopher-Football-Fan-Living-In-Georgia:  our friend, Lance Rackley.  Lance moved to Georgia when his son, (Minnesota Golden Gopher Tight End and Long-Snapper) Derek Rackley, was drafted in 2000 by the Atlanta Falcons. To celebrate, we're having steaks on the grill and a delicious and appropriately festive dessert - Stadium Bars!    What could be better than a sweet, decadent brownie topped with the classic salty stadium fare -  popcorn and peanuts? The recipe begins with prepared brownie batter.  Someday, I promise I will bake a batch of brownies from scratch, but today I use the tried and true Ghirardelli Triple Chocolate Brownie Mix. Top the prepared batter with 3 cups popped Kettle Korn, 1 cup roasted and salted peanuts and 1/2 cup semi-sweet chocolate chips - because triple
1 comment
Read more
More posts