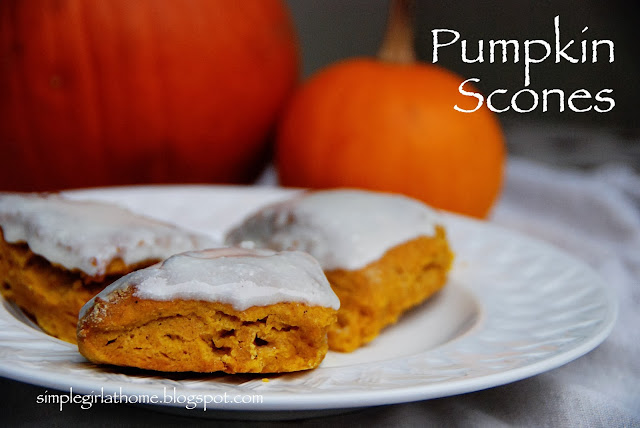 It's October, and that means Costco is selling cans of pumpkin by the six-pack.
Ahhh.... I love Costco.  I mean, who doesn't need six cans of pumpkin? 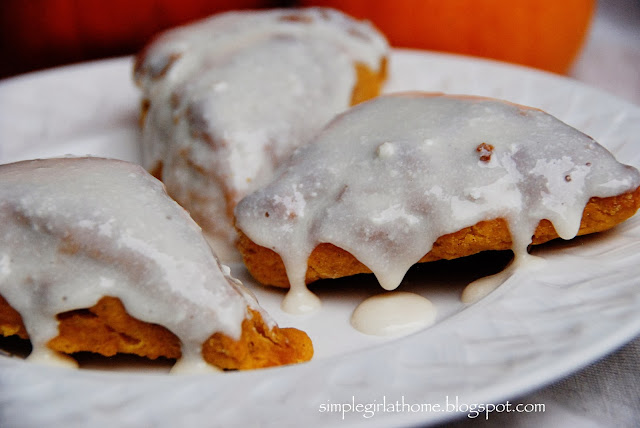 And what could be better than scones and tea on a brisk, October day?  My interpretation of the scone is that they are England's version of Southern Biscuits.  But they're triangles.  Not circles.  (OK, they could be circles.) And they're served with hot tea.  Not Iced Tea.  And they're slightly sweeter.  But not too sweet. And they are usually served between meals and hardly ever with gravy.  Other than that, they are very similar. 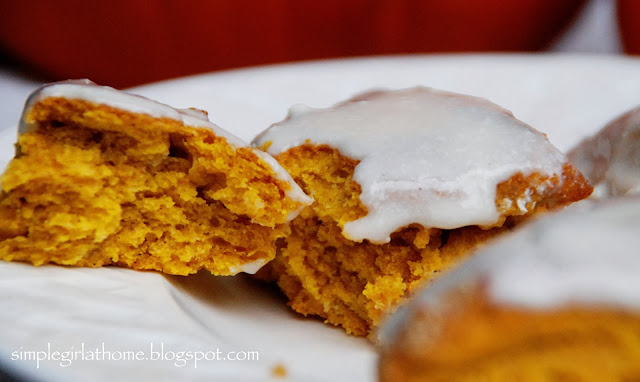 And delightful.  And perfect for a crisp, autumn day.

Preheat oven to 400 degrees.  Whisk together dry ingredients.  Cut in butter with a pastry cutter.  Mix together pumpkin and cream and incorporate into dry mixture until combined.

Press dough into an 8 inch square on a well-floured surface.  If the dough is sticky, add a little more flour.  The dough should be roughly 3/4 inch thick. Cut dough into 16 triangles.  Bake for 20 minutes.  Cool.

In the microwave, soften 4 ounces of cream cheese for about 30 seconds.  Add one cup powdered sugar and 2 tablespoons half and half until combined.  Dip each scone into the cream cheese glaze until the top is coated.

Bright and Beautiful Life said…
I'm drawn to anything pumpkin this time of year and your scones look heavenly. These would be delicious on a cool fall morning or evening with a hot cup of tea. Would you be willing to share this recipe post at our Making Monday link party? We would love it. Thanks. Have a fabulous day. http://www.abrightandbeautifullife.com/making-monday-9/

Lori @ A Bright and Beautiful Life
www.abrightandbeautifullife.com
October 16, 2013 at 8:48 PM

Miz Helen said…
Hi Rachel,
I just love scones and your Pumpkin Scones look delicious. Thank you so much for sharing with Full Plate Thursday. Hope you are having a great weekend and come back soon!
Miz Helen
October 20, 2013 at 6:54 PM

PJ @ Planned in Pencil said…
These sound heavenly, and I'm pinning to make ASAP! Thanks for sharing at the Pinworthy Project Link Party.
October 22, 2013 at 4:25 PM

Happy New Year!  We are off to a cold start! It's so cold that the Governor cancelled school for the entire state! That never happens. Up here in Minnesota, when it gets cold, we just pull up our snow pants and pull down our hats.  In the South, they say it's not the heat, it's the humidity.  Up North, we say it's not the cold, it's the wind.  Windchill temperatures (what it actually feels like), are said to be -40 to -50 degrees Fahrenheit. That's the coldest it's been since 1996 - just shortly before we moved to Atlanta.  Hmmmm…… it's all coming back to me now.  Nevertheless, my 16-year old says it's a great way to start second semester! When it's cold outside, there is nothing I love more than making soup. Soup is the perfect excuse to stand over a hot stove on a cold day. You can hold soup in a coffee mug and let it warm your hands. You can sip soup in the same mug and let it warm you from the inside out. There's a reason for
Read more

One fish, two fish, red fish, blue fish.  I admit it.  I love Dr. Seuss!  A collection of these sing-song-y rhymes was the first thing I put on the bookshelves of our very first baby nursery.  Four kids later, I now have talents that include being able to recite The Cat In The Hat from memory! In honor of the late great Dr. Seuss (He would have been 107 on March 2nd) we are making these cute snacks!  Absolutely no skill or talent required! Simply start with a box of blue Jell-O..... and divide into four clear plastic cups. (The fish have to have a place to swim!) After the Jell-O has set, have the kids add their own fish!  (Swedish Fish, that is!) Ella's kindergarten class gets a Dr. Seuss party after they have collectively read 107 books! Happy Birthday, Dr. Seuss!
Read more 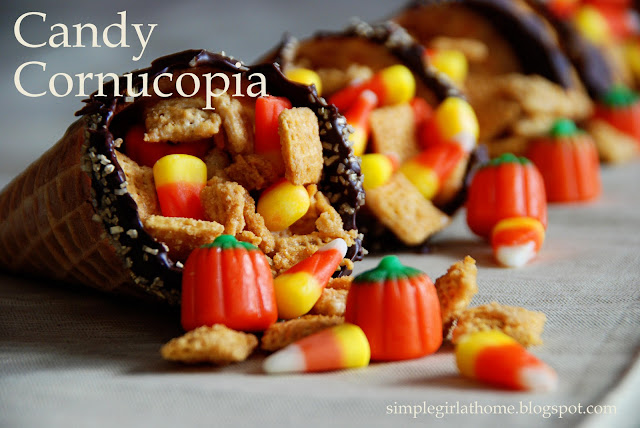 I wasn't sure if I should call these "Candy Corn"ucopia or "Waffle Cone"ucopia.   Either way, I thought they would make a cute Thanksgiving take home treat for the kids in 1st grade.   OK, forget the kids!  What grown-up wouldn't love a cone of treats sitting at their table? To make, simply buy some waffle cones and dip the edges in melted chocolate.  I added "Gold Sugar" to the edges to make them prettier!  Fill with Caramelized Crispy Snack Mix . Add candy corn and candy pumpkins. If you use them as a take home item, simply insert the waffle cones into cone-shaped cellophane bags. Tie with raffia. Don't forget to Give Thanks this Thanksgiving! THIS POST MAY BE LINKED TO:  MONDAYS :  MOUTHWATERING MONDAYS ,  MADE BY YOU MONDAY , MINGLE MONDAY  ,  HOME SAVVY A TO Z ,  TUESDAYS :  TALENT SHOW TUESDAYS ,  MUSHKI LOVES MY STUFF   TUESDAYS AND THE TABLE,   TEMPT MY TUMMY TUESDAY , TWO MAIDS A BAKING ,
Read more