So Two Priests Walk into a Bar.... 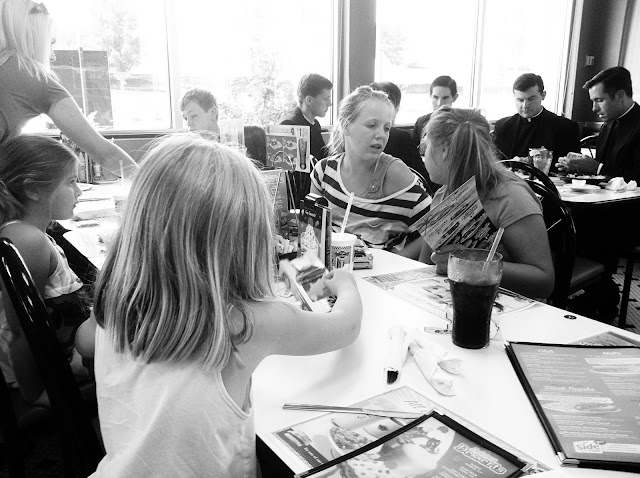 Ok, so it wasn't a bar, it was Steak and Shake, and it wasn't just two priests, it was five.
Have you ever found that real life is a funny story?  A juxtaposition of circumstances that seem so oddly humorous that mere words cannot describe it?
Yesterday, my friend Kathy and I decided to bypass the summer lunchtime blues and take the kids to Steak and Shake.   Between the two of us, we showed up with 8 kids. As fate would have it, we were seated at a table adjacent to five priests.  Since I was not raised Catholic, I am quite sure that I have never seen five priests just hanging out together, let alone at a Steak and Shake.  Were they, like us, praying for a hedge of protection around their pancreas as they sipped their Cookies and Cream Milkshakes?  Were they, like us, praying that somehow the chili fries would transform into green vegetables on their trip down the esophagus?
We tried to seat the squirmy, younger children as far away from the Holy Table as possible.  We prayed that shooting straw rockets would not be launched into aforementioned foreign air space. 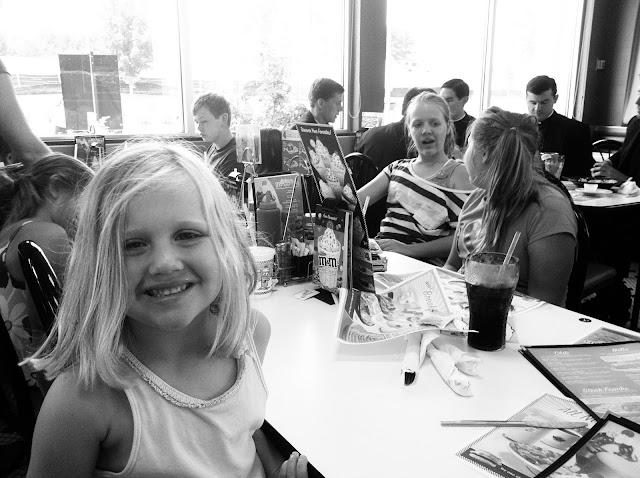 On their way out, the Priests said Hello and gave us a warm, knowing grin.  It suddenly dawned on me.  Oh, the irony!  While we found the unusual situation of sitting next to them amusing, they saw the serendipity of sitting next to us - what appeared to be two nice Catholic girls and their large families!  It's funny how life is sometimes!
Laugh