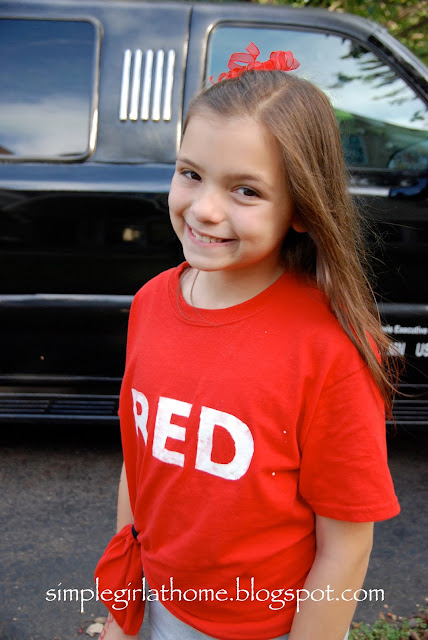 During the course of my entire life, I have been invited by friends to two concerts. And by concerts, I mean music written post-1960 and not performed by middle schoolers.  They were 1987 - Echo and the Bunnymen (we're not friends anymore) and 2011 - Journey (I had no idea that people my age still dressed liked that).  So when my sister-in-law suggested we take the girls to see Taylor Swift, I had no idea what to expect.  After waiting almost an entire year for this sold out concert, the question became:  What do we wear?  I decided to pop into our local Justice.  If you have pre-teen girls, I know you've shopped there!

The store clerk was decidedly helpful.  She told me not to buy anything at her store, but to go to our local Michael's, buy some $3 T-shirts and make our own concert shirts.  Since it was Taylor Swift's "RED" Concert Tour, the color was decidedly obvious.  Three dollars?  OK.  I'm in! 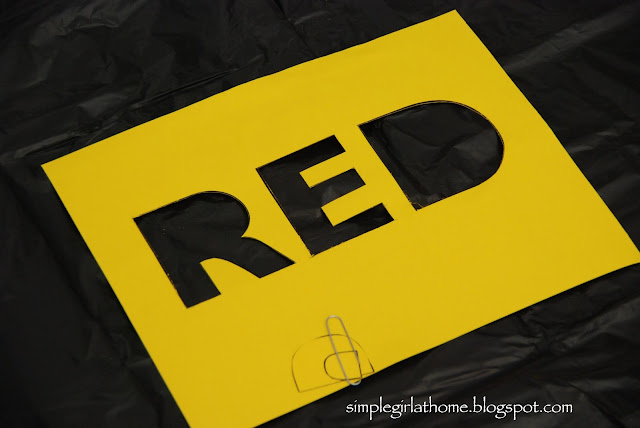 Start by printing out the word, "RED" on card stock.  Cut it out, saving the inside of the "R" and the "D". Also, make sure your shirt has been pre-washed and dried without a dryer sheet. 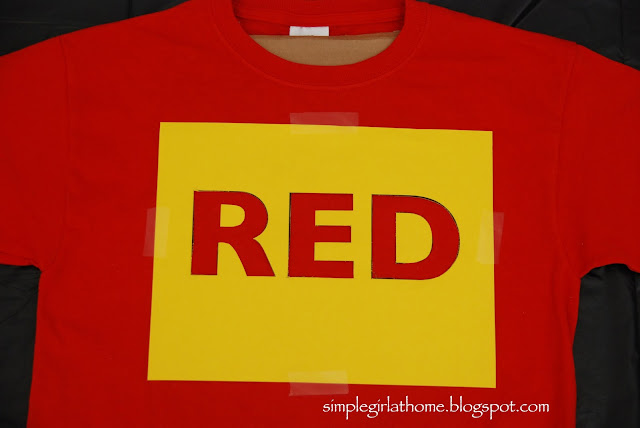 Next, place a piece of cardboard inside the shirt.  This is important so that the shirt doesn't stick together once the paint is applied. Tape the stencil onto the shirt, position the inside of the letters with tape. 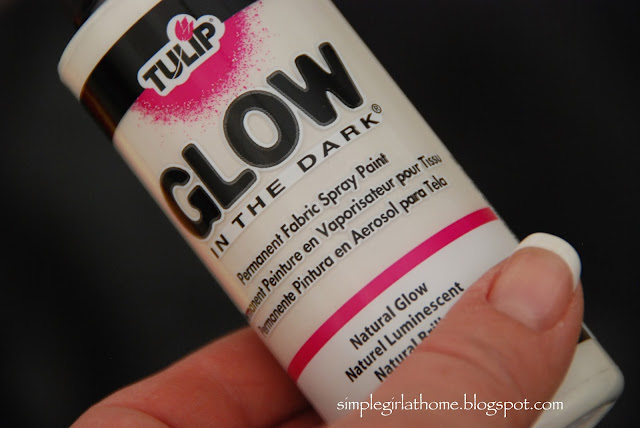 Spray on Glow in the Dark Fabric Spray Paint so that the letters are well covered.  This pump spray only worked so-so, but just keep shaking it and wiping down the nozzle until your coverage is complete. 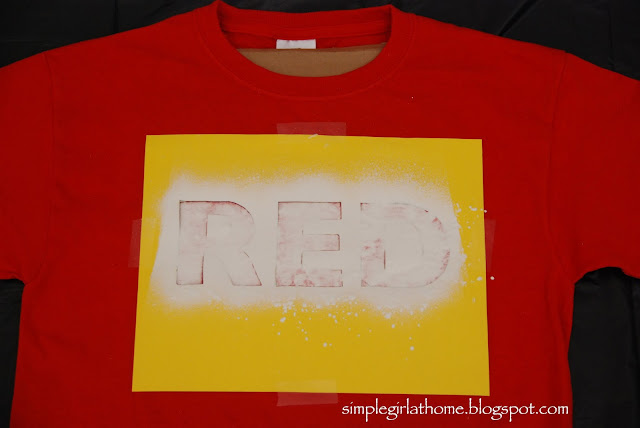 Don't worry about a little overspray.  Emphasize the fact these are ONE OF A KIND shirts!! 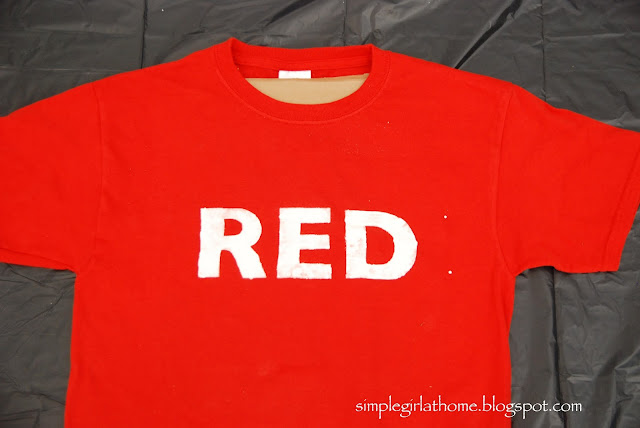 Use a knife to pry off the stencil without it smearing to other parts of the shirt.
Let dry overnight.
They really do glow! 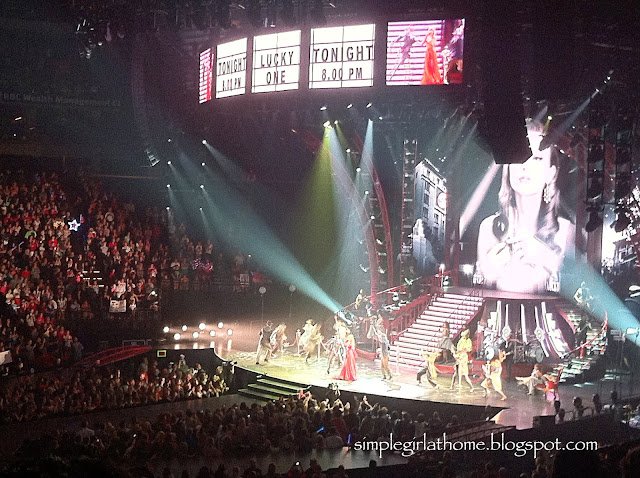 Now that I am uniquely experienced, here are a few family concert tips: 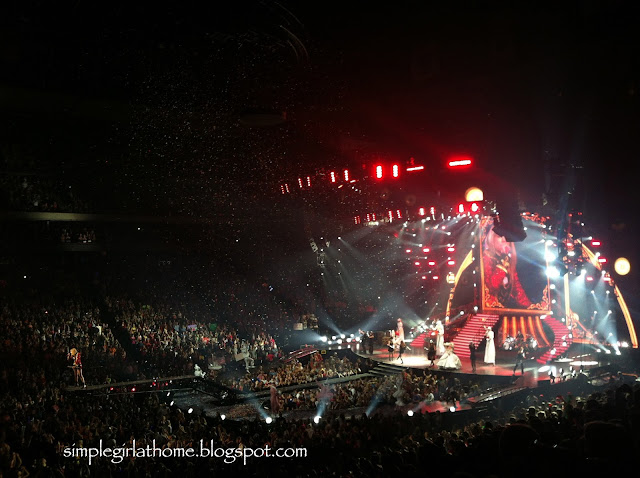 The concert pageantry was amazing! 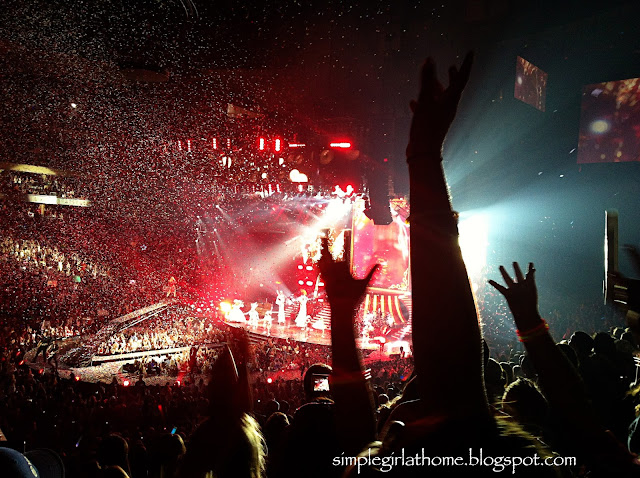 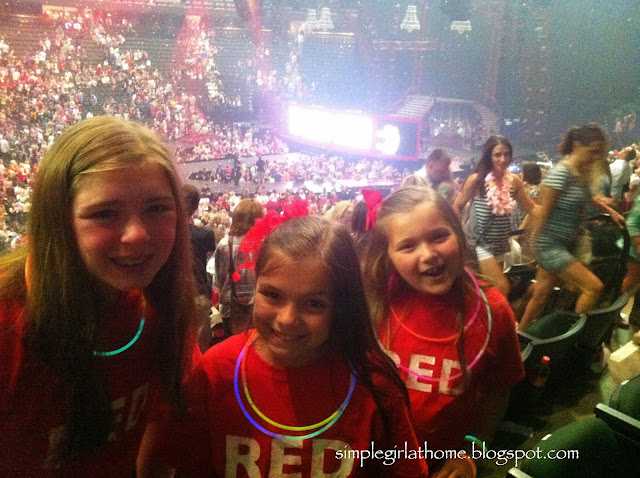 Totally worth a month's worth of grocery money!

Posted by Rachel @ Simple Girl at 3:05 PM No comments: 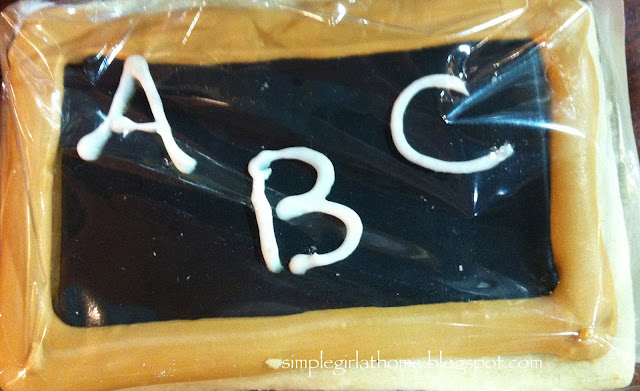 I didn't make these.  But that's not the point.  The point is that I think I could have made these!  It's not often that I find really cute cookies that I could possibly duplicate at home.  But these?  Maybe! 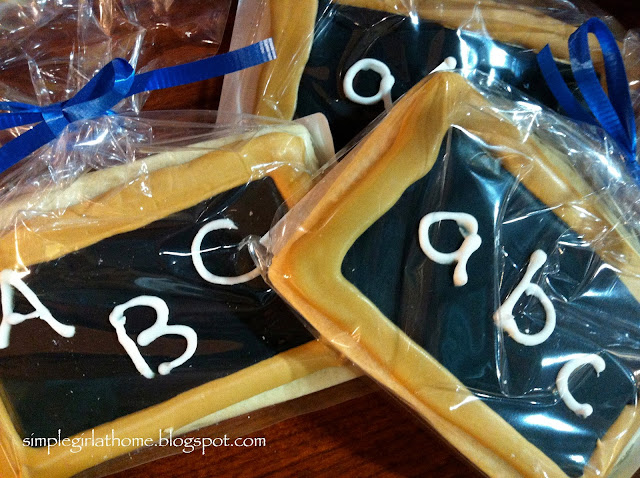 But for now I'll just ignore the store clerks at the fabulous Kowalski's Market, carefully arrange the wrapped cookies and take pictures of them.  Because that's what people with iPhones do. :-)

Happy Back to School!

Yesterday was Labor Day.  The Official last day of summer.  I apologize for my unplanned blogging vacation.  Please forgive me!  I'm blaming it on our move north.  This is why.  When I lived in The South, summer would come and I would secretly dread it.  Legs sticking to car seats, ice cream that couldn't make it from the grocery store to home, taking the kids to the pool every day and being forced to don a swim suit, ninety days of pony tails.........  It was too hot to go for walks.  Too hot to go to the park. I was completely happy spending my days inside blogging, longing for October when I could finally open a window and breath some fresh air.

Not here. Somewhere between July and August we hit the perfect days of summer.  It's not that I stopped doing anything blog-worthy, it's just that I stopped spending time posting it.  In fact, I stopped checking my email, never looked at Twitter and even, much to my children's chagrin, overlooked an  important event or two. Summer here creates a certain urgency. I simply needed to breath in every magical day of summer before it was too late! 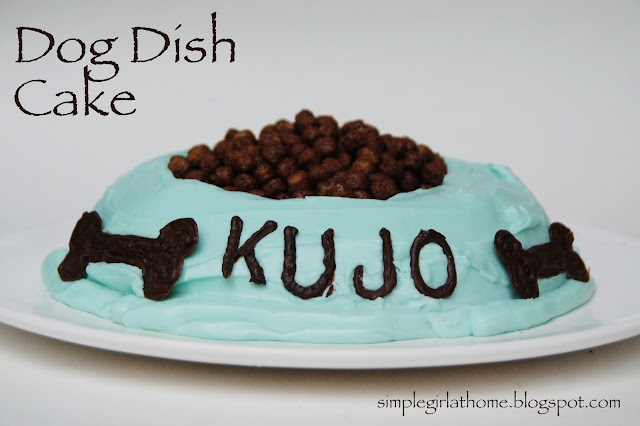 In July, our dog had a birthday. We had a party. With presents. And a doggie friend. And cake. Is that wrong?  The cake was just for the humans.  Our dog can't eat cake.  He has IBS. It's not pretty. 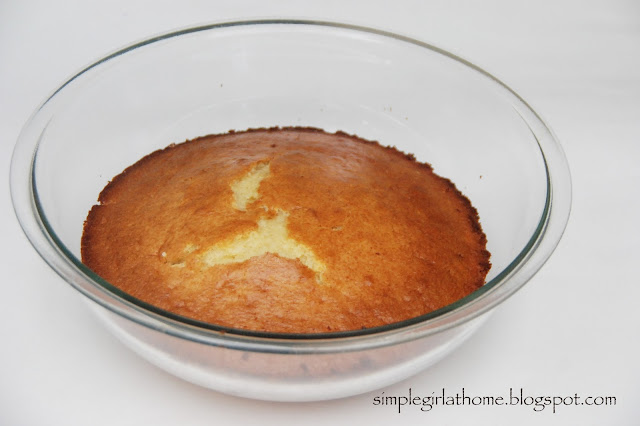 We humans, however, we love cake! This dog dish bowl was a snap to make!  First, bake the cake of your choice in a large pyrex bowl.  Make sure you grease it with cooking spray. 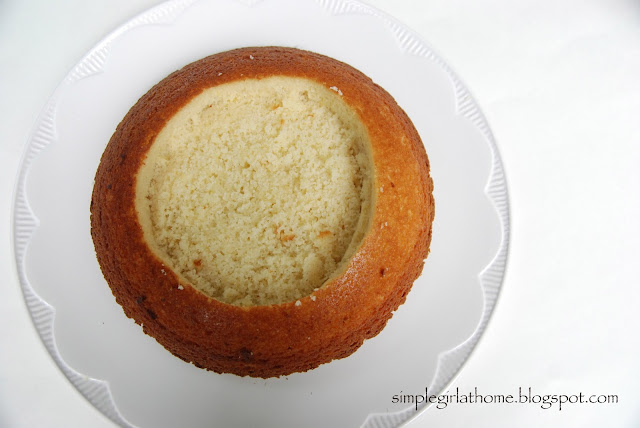 Next, invert the cake onto a large platter.
Using a paring knife, carve out a "dish" that's about an inch deep. 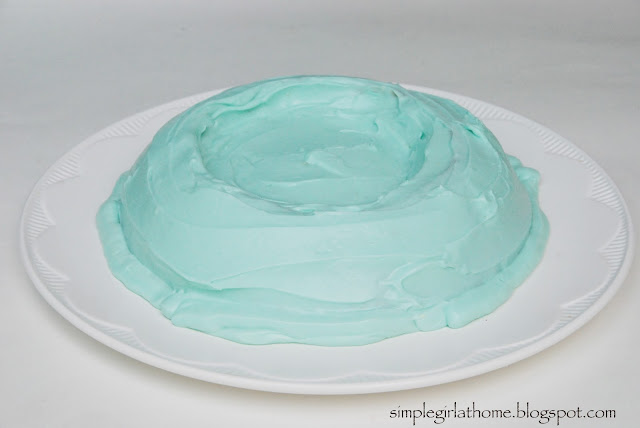 Frost it completely.  Pipe another layer of frosting along the base. 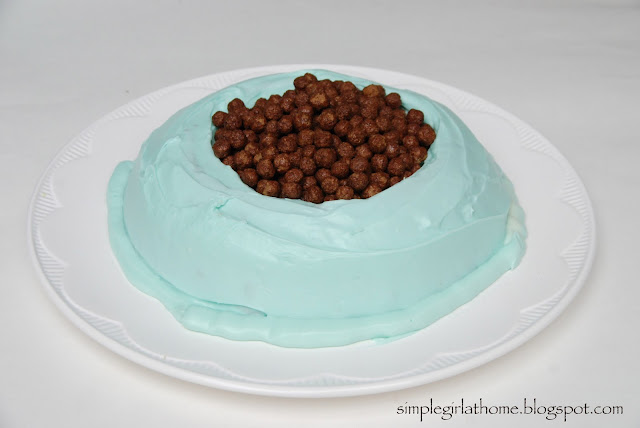 Fill your dog "dish" with Cocoa Puffs.
Isn't it weird how Cocoa Puffs look just like dog food?
Somehow, it doesn't deter the kids from eating them! 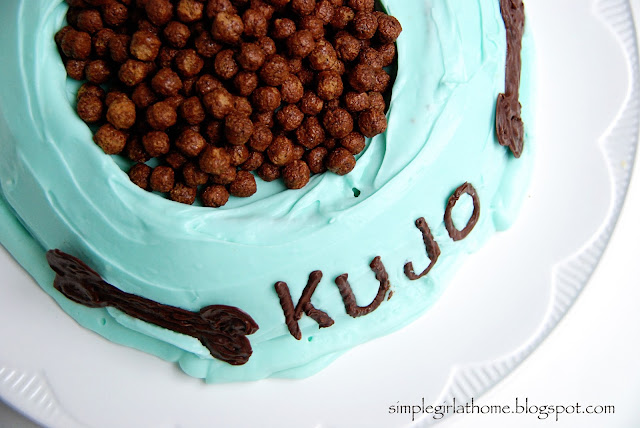 Decorate your bowl.
I piped letters and bone shapes with melted chocolate onto parchment and then placed it on the bowl.
This way, you are guaranteed perfection!

I'm glad to be back!
xo
Rachel 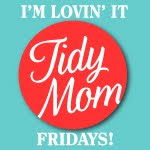 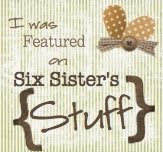 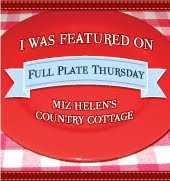 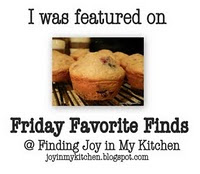 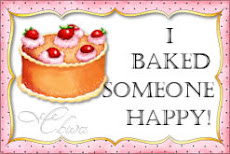